9 Fun Things to Do in Seattle 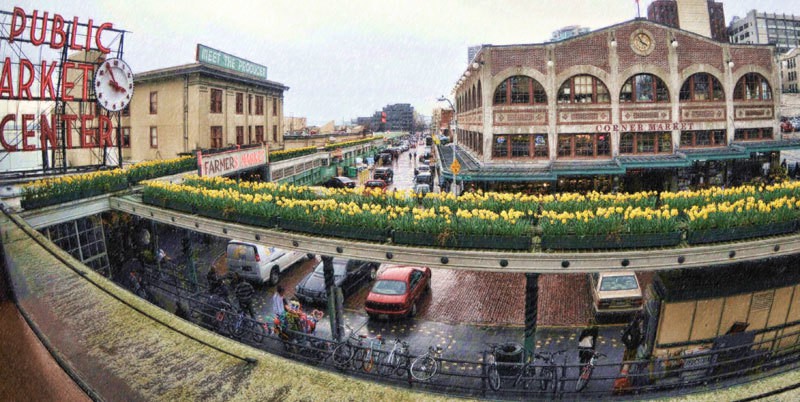 There are many options of things to do in Seattle from sightseeing tours such as our Snoqualmie Falls and City Tour, to exploring Seattle waterfront and local neighborhoods like Fremont, how of the famous Fremont Troll.

We thought we would put together ideas for you to help make your travel plans to Seattle. 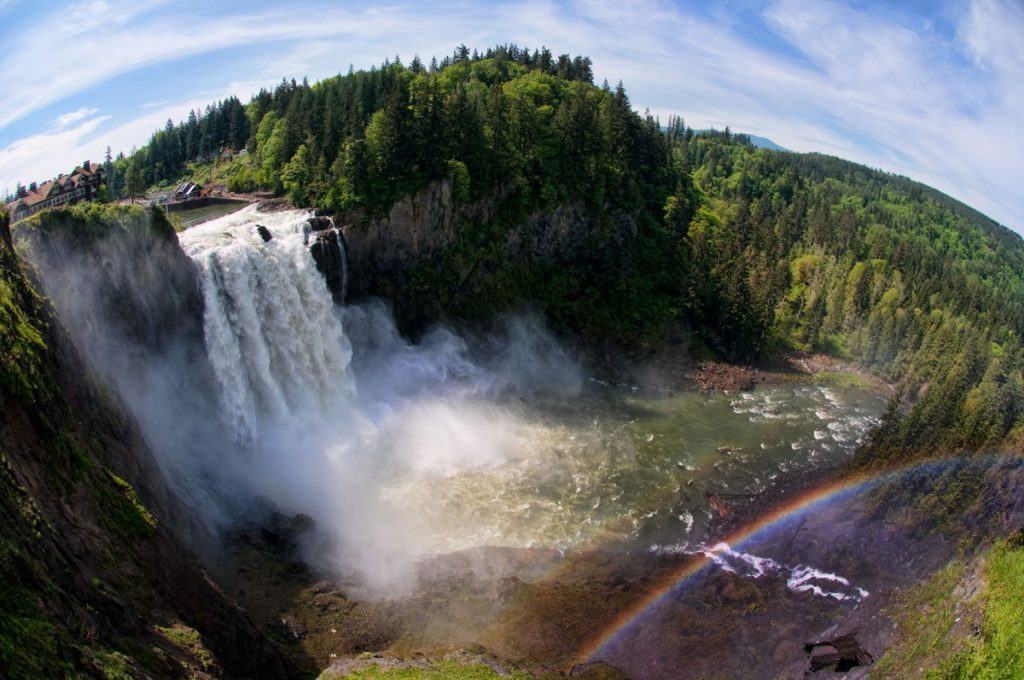 Of course, we think our Snoqualmie Falls and City Tour is the best value in Seattle and so do over 900 people on Trip Advisor who gave us 5-star reviews. Our tour begins at Pike Place Market at 10 AM, just late enough where you can grab some breakfast at Biscuit Bitch, known for their biscuits and perhaps a cup of coffee at the original Starbucks or one of our favorite coffee shops, Storyville Coffee. 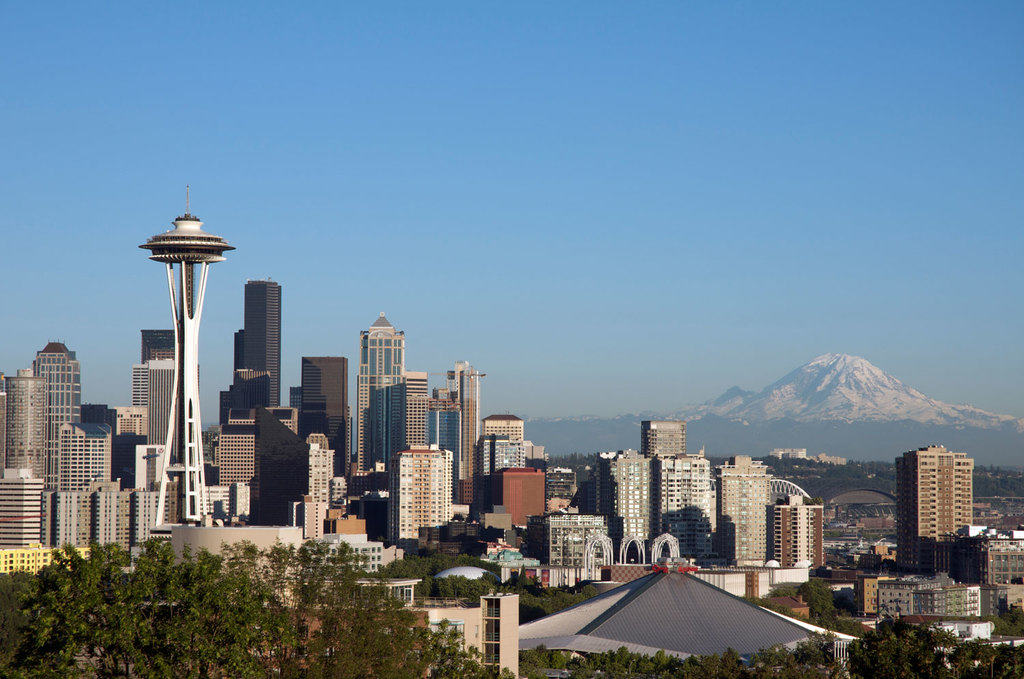 You’ve probably searched for how to get to the location where the famous viewpoint is in Seattle with the Space Needle in the foreground, that is Kerry Park, our last stop on our tour. This is the view made famous in the show Frasier, and we often see Mt. Rainier towering 14,410 feet in the distance. By taking our tour you can check this off your bucket list, but better than that, you’ll have the perfect viewpoint to get some fantastic photos of the city to remember your trip to Seattle.

Dale Chihuly is a world famous glass artist known for his large-scale “Glass Sculptures” and was born and raised in the Seattle area. You may not know this, but Seattle is #2 in the world for glass studios next to Murano, Italy thanks to the local influence of Dale. Dale Chihuly’s  work has been featured all over the world and is included in more than 200 museum collections worldwide. On your visit to Seattle, you don’t want to miss this impressive Chihuly Gardens to see the work of this master artist that has brought a whole new appreciation of glass art. 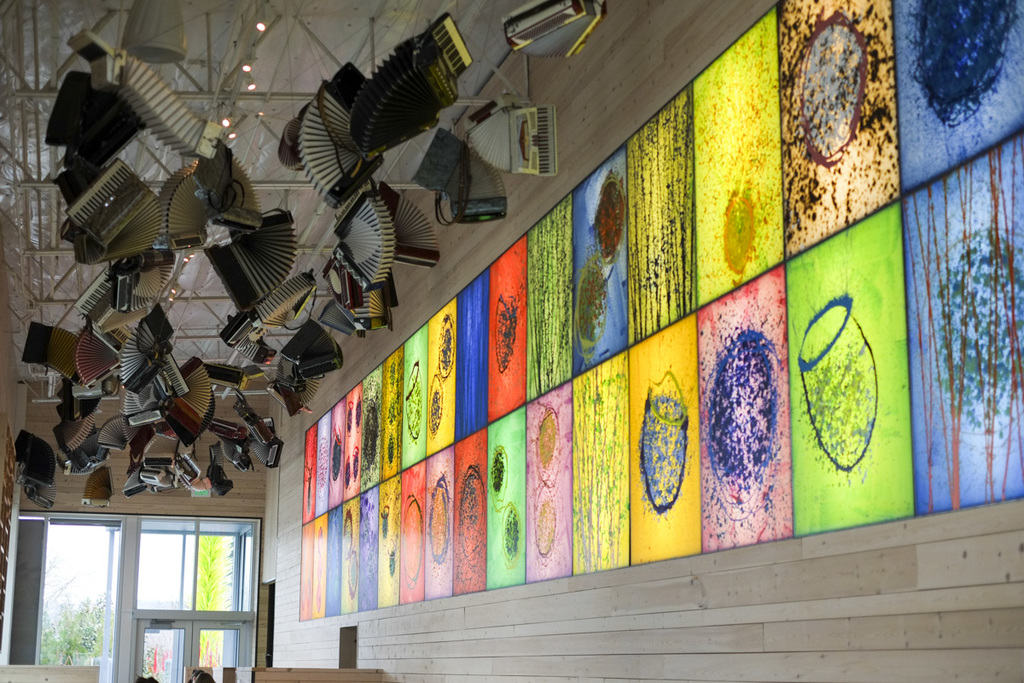 Located right next to the Space Needle, the gardens have both an indoor and outdoor area and if you are hungry after your visit, check ou the Collections Cafe’. The cafe’ has an excellent menu and decorated with many items that Dale enjoys collecting. We were told by staff that Dale has a team of four people who travel the world looking for items for his eclectic collections

Take a Ferry to Bainbridge Island 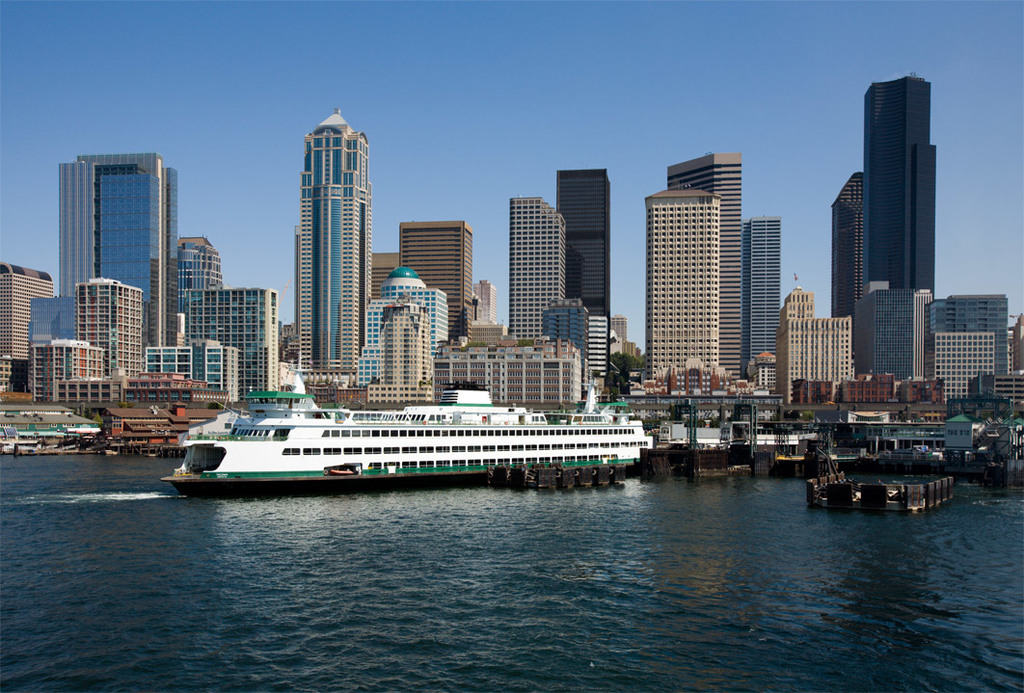 A simple way to get on the water and enjoy a city view is to take a two-hour trip aboard a Washington State Ferry. These ferry’s run about every 50 minutes to Bainbridge Island. The crossing is a short 35 minute crossing each way and allows an excellent view of the city skyline. You can either return after your arrival to Bainbridge Island and have lunch or an early dinner at the  BIMA Bistro at the Bainbridge Island Museum of Art.

There is no need to buy tickets in advance, just go to the ferry terminal at Colman Dock on Pier 52 to ride the ferry. Make sure you take the Bainbridge Island route and not the ferry to Bremerton, which is a longer trip.

Round Trip Ticket Around $9.00

No trip to Seattle is complete without a visit to the Pike Place Market. The market is the heart and soul of the city, and with over 10 million visitors a year, it’s a place you don’t want to miss when you visit Seattle.  We love the energy and vibrancy of the Pike Place Market, and we suggest you take some time to explore the different levels and shops within the market.

Starting in 1907 on the corner of First and Pike Place when seven farmers showed up to sell their produce direct to their customers, they wanted to eliminate the middlemen. This was more of a protest to the extreme prices being charged to the consumer by the middlemen when they were selling onions for  $1.00 a pound, but only paying .10 cents a pound at the wholesale level. The market has been running continuously ever since.

Pike Place Fish is always is where the world famous fish mongers throw the fish. They throw the fish to the guys behind the counter so they can be weighed and wrapped. Ask the fish mongers if you can catch the fish and they might let you do that, but don’t tell anyone else about this inside secret.

In 1912, Three Girls Bakery opened in the Corner Market Building on the corner of First and Pike (where Pike Place Flowers is now located). Advertising two loaves of bread for 15 cents: “A good deal for your money.” They recently celebrated their 100th anniversary in 2012 and are the oldest business operating in the Pike Place Market.

In 1918 the City of Seattle created City Fish to counter the high prices of fish when there was a sudden rise in the cost of salmon to 25 cents a lb. This additional competition created by the city of Seattle brought the salmon prices back to ten cents a lb. The city gave up its role of fishmongers and moved to other pressing matters after the war. Pure Foods Fish, is our favorite place buy the best smoke salmon we have ever tried.. seriously. Sean is the guy you want to talk to and ask him for a free sample. A good way to get a generous serving is to say your want a $10 or $20 piece as opposed to asking for it by weight. That’s just another little insider tip for you.  They will let you try before you buy and have a taste They can also pack for you to ship home or you can order online on their website.

If you are a photographer and looking for some great people to photograph, the Busker, also known as performers, make some great subjects. Many of them work in the market full time, and this is where the derive most of their income through the generosity of donations from tourists. If you do take a photo of the performers, please be sure to offer them a simple tip as a thank you. Our friend Farrell, the Balloon guy, is real comfortable with you taking his photo and he will talk your ear off if you let him. He is sure to give you some fun photos to take back home.

The Original Starbucks can be extremely crowded during the day. If you want a coffee at the Original Starbucks (Even though it tastes the same as the 25,000 other Starbucks), get there early or wait until after 6 PM.  Some days there are over 100 people in line, being that it is one of the busiest Starbucks in the United States, so prepare to wait in line especially during the height of the travel season in July and August.

Do you know where the busiest Starbucks in the U.S. is? The location is so secret that only those that have special access can enter the secret Starbucks location. 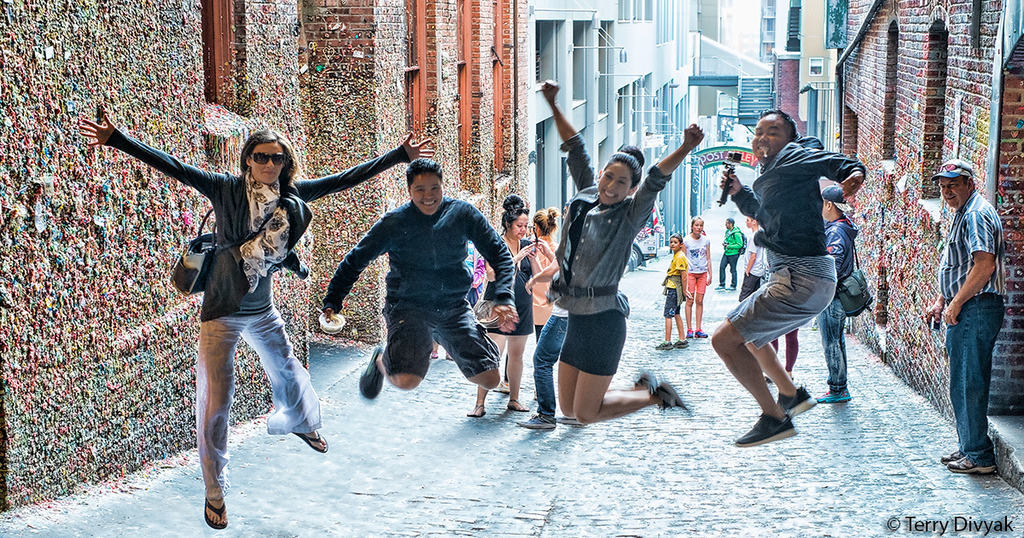 Once named the second germiest place in the world on Tripadvisor.com. Second, only to the Blarney Stone, you don’t want to miss the infamous Gumwall. This wall of gum has been featured in a two-page spread in National Geographic Magazine.

A year ago the Seattle gum wall was cleaned after gum accumulated for the past 20+ years. Workers removed over 2,300 lbs. of gum, and it took them 130 hours of pressure washing to clean the wall. This has only inspired people to add more gum to the wall, so make sure you bring some to contribute to this strange attraction.

The Seattle Gum Wall is located in Post Alley next to Ghost Alley Espresso where you can buy another excellent cup of coffee. 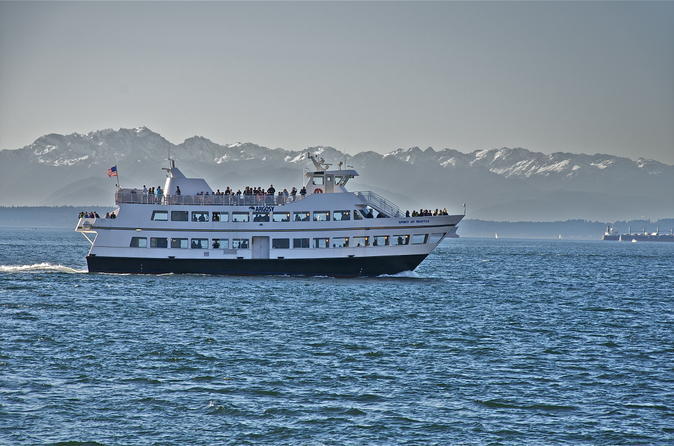 Seattle sits on the Puget Sound, a large body of salt water that connects to the Pacific Ocean, making it one of the most picturesque cities in the world. The snow-capped Olympic Mountain Range can often be seen in the distance on a clear day. View the spectacular panoramic background of the majestic Cascade and Olympic mountain ranges, the unique city skyline and while enjoying a first-hand look at one of the world’s largest shipping terminals. The cruise is only an hour, so it doesn’t take up a big part of the day. Before or after your cruise, head over to Ivars Fish Bar near Pier 52 and enjoy their famous fish and chips. The restaurant was started by Ivar Haglund who was known as “King of the Waterfront” and also built Seattle’s first aquarium. Just make sure you order extra tartar sauce because that’s what us Seattleites do. The more tartar, the better. 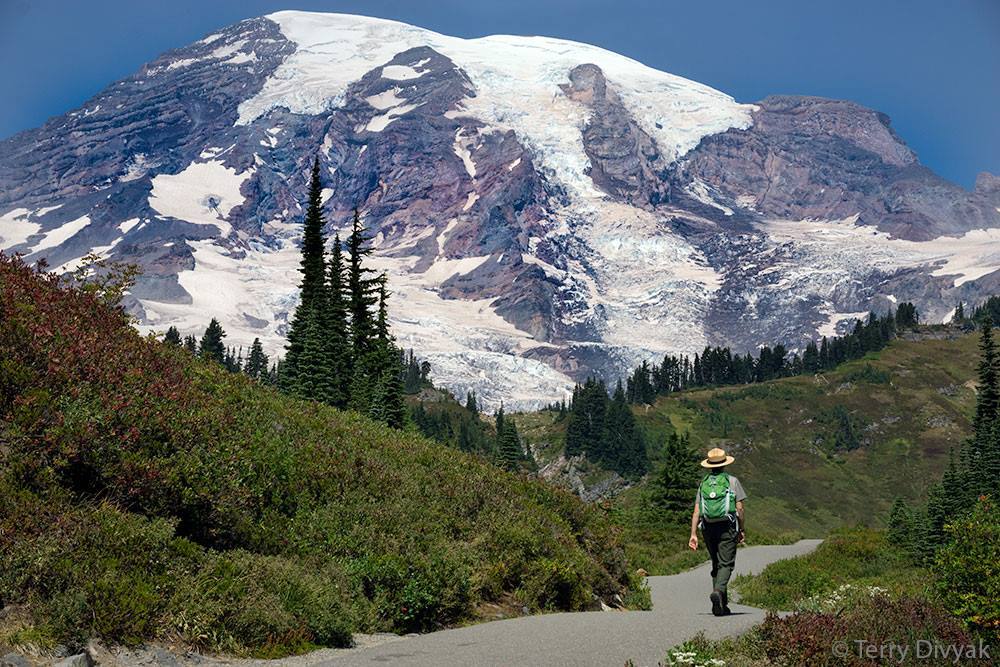 Mt. Rainier is one of the most beautiful mountains in the world, and you want to add this to your travel list if you have time. Towering over 14,410 above the Puget Sound area, this mountain can be seen from hundreds of miles around and people are often surprised how far it is away from Seattle, even though it appear very close. A day trip will take about 10 hours and is best done June-September, and most tour stops include the Paradise Lodge, which has a short hike to the beautiful Myrtle Falls, Longmire Lodge, and Christine Falls. During late summer, you may see the alpine flowers in bloom within an easy walk of the Paradise Lodge.

Dinner and Theatre at Teatro ZinZanni 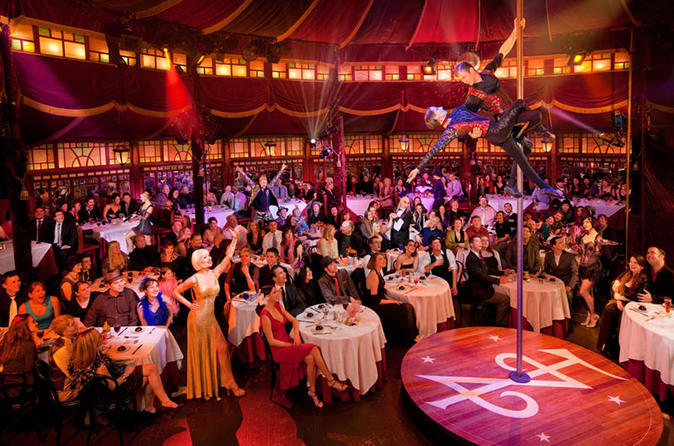 Looking to eat and be entertained at the same time? Well, then Teatro ZinZanni is not to be missed. Here you will experience a unique evening of cabaret, comedy and a full-course dinner in a turn-of-the-century tent. It’s a 3-hour show of cirque, comedy, and cabaret all served up with a 5-course meal. Opt for the matinee and enjoy a 2-hour show with a delicious 4-course meal. Described as “the Kit Kat club on acid,” and “the place where the Moulin Rouge meets Cirque du Soleil,” Teatro ZinZanni is a unique alternative to simply sitting in a restaurant while visiting Seattle.

Located near the Space Needle in the Seattle Center, this is a great place to bring children and adults who enjoy science. Built for the 1962 worlds fair, the three arches of the Pacific Science Center have been a familiar part of the Seattle skyline as they tower above the reflecting pools. The exhibits change on a regular basis, and there is always something exciting to see no matter what time of year you visit Seattle.

Seattle to Victoria Aboard the Clipper Ferry 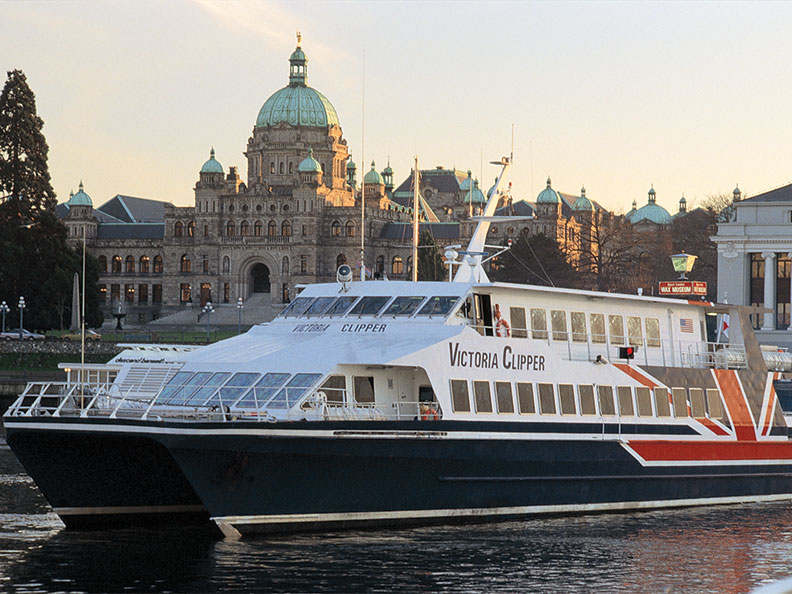 Victoria, BC Canada is only a short 2-3 hour ride from downtown Seattle on a high-speed ferry. Traveling aboard the Victoria Clipper is a fast way to get to your destination. While onboard, entertain yourself, your family and friends with a board game, some shopping or conversation. With tables situated throughout the ship, you’ll be able to catch up on some work or play a round of cards. The vessels also have outside decks where you can get some fresh air and admire the passing scenery. It is not unusual to see Orca Whales on your way to Victoria.

Round Trip Ticket From Seattle starting at $121

Though this is a short list of things to do in Seattle, we hope we gave you some ideas to make your visit the best it could be while visiting the Emerald City.

This entry was posted in Seattle Info, Tours. Bookmark the permalink.