There is no doubt that Seattle has come into its own in the world of sports. From the Superbowl Champion Seattle Seahawks to a soccer fan base that is passionate about their team, the Seattle Sounders. 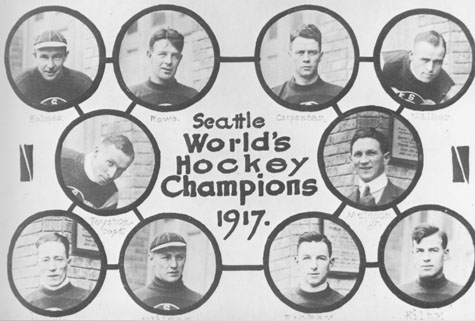 The last time the Seattle Mariners won a pennant, Facebook did not exist. Facebook was founded in 2004, and the Seattle Mariners last won an American League West Pennant in 2001.  In the previous three years, Ken Griffey Jr., Randy Johnson and Alex Rodriguez had all left the team. No one was expecting the world out of whoever was left. Instead, what they got was 116 wins, the most in American League history and tied for the most ever with the 1906 Chicago Cubs. 2001 was also the year Ichiro Suzuki debuted for the team, possibly the most beloved Mariner ever after Griffey. He led the league in batting average and won the AL MVP.

Ken Griffey Jr. was recently inducted into the Baseball Hall of Fame, Breaking Tom Seaver’s voting percentage record by receiving 99.32% of the vote. 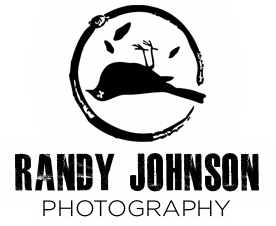 Randy Johnson, a former Seattle Mariner, was inducted into the Baseball Hall of Fame in 2015. The Big Unit was named on 97.3 percent of that year’s ballots, which is the eighth-highest percentage in Hall of Fame voting history. He is also an avid photographer. He follows his passion by shooting wild animals in Africa, Rock and Roll bands and fast and furious sports. His website logo pays homage to the bird that flew in front of a fastball against the Giants in the seventh inning of a spring training game in 2001. He also majored in Photojournalism while attending USC. 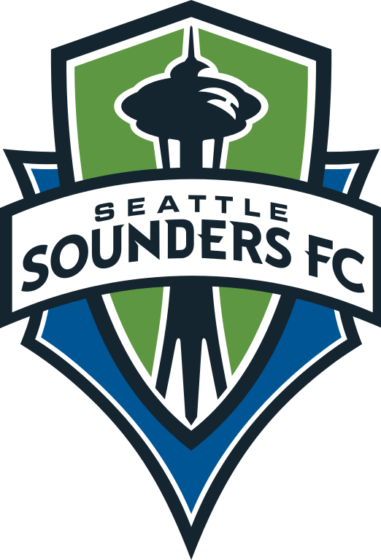 In 2015 the Seattle Sounders averaged more than 44,000 attendees per soccer game, double the MLS average and 28th highest in a soccer world with thousands of pro teams. On October 7, 2012, a record was established when a crowd of 66,452 attended a Sounders 3-0 win over the rival Portland Timbers, making this the third most attended soccer game in the world for that week. The Sounders then beat their own record on August 25, 2013 again against the Timbers with 67,385 in attendance for Clint Dempsey’s home debut, a 1-0 win for the Sounders. 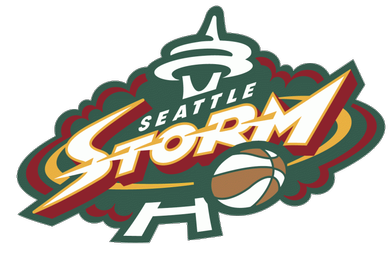 Seattle Storm in the 2010 season, the Storm were almost unstoppable with a record-tying 28 wins and 6 losses in the regular season, including a perfect 17–0 at KeyArena. This was the most home wins in the history of the WNBA.

The Seattle Storm’s ownership group, Force 10 Hoops LLC, is comprised of three Seattle businesswomen and civic leaders, all season ticket holders, who stepped forward to purchase the Storm in January 2008 so that the team would remain in Seattle.

The Seattle Seahawks were not the first professional football team to use the Seahawk name. In 1946 the Miami Seahawks played the New York Yankees, Brooklyn Dodgers and the Buffalo Bisons in 1946. After playing a single disastrous season the Seahawks were confiscated by the league, and were purchased and reorganized by a group of businessmen as the Baltimore Colts.

Since it debut in 1975, people have speculated as to what inspired the Seahawks logo.

Though the origination of the idea of what inspired the logo was a mystery until recently, when it was learned that a British Columbia Kwakwaka’wakw mask, became the inspiration for the original Seahawks logo. The mask is part of the Hudson Museum collections today. 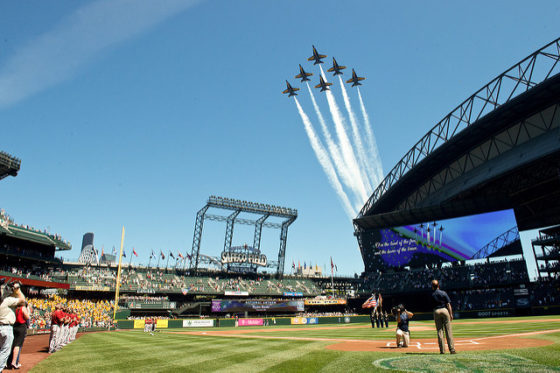 Safeco Field is named after Seattle-based Safeco Insurance, founded in 1923. The company paid $40 million for the naming rights for the ballpark’s first 20 years. It was built for an estimated cost of $518 million, $100 million over budget, making it the 5th most expensive baseball stadium in the world. (Yankee Stadium at $1.3 billion is #1)

The ballpark’s one-of-a-kind retractable roof is designed to cover but not enclose the ballpark, thus preserving an open-air environment. The structure covers nearly 9 acres, weighs 22 million pounds, and contains enough steel to build a skyscraper 55 stories tall. The three movable panels glide on 128 steel wheels powered by 96 ten horsepower electric motors. A push of a button closes or opens the roof in an average of 10-20 minutes (depending on the wind and other weather conditions). The roof is self-grounded (in the event of lightning strikes) and is designed to withstand 6-7 ft. of snow and sustained winds of up to 70 mph.

The average number of times the roof is closed is just 19 per year. Per their media guide, if the roof is closed at the start of the game, the Mariners have the option of opening the roof between innings, provided they notify the umpire crew chief. The visiting team also has the right to challenge the opening. The Mariners can only have one opening per game (no manipulating roof to mess up the batters of opposing team).

Safeco Field’s playing surface is a custom designed state-of-the-art field. It features a specially designed drainage system and a custom blend of four kinds of Kentucky bluegrass and two kinds of perennial rye grass to provide the optimal playing surface for the athletes, the retractable roof, and the Northwest climate. The drainage system includes layers of drainage pipe, pea gravel, sand, and grass. A spider web of one-inch plastic hose circulates hot water under the grass to bring it out of dormancy in time for Opening Day, and also compensate for shade and low levels of direct sunlight. Source

Paul Allen purchased the Seattle Seahawks in 1997 at an estimated cost of $194 million from Ken Behring who sold after his ownership years from 1993-1996 were overshadowed by a struggling record of 27-37 during that time. When Paul purchased the team, they were playing in the Kingdome, which was one of the ugliest and least enthusiastic places to watch a professional football game. The Kingdome was imploded on March 26, 2000 to make way for today’s Century Link Field.

Century Link Field was built at a cost of $430 million dollars and has a seating capacity of 68,000, configurable to 72,000 for special events.

A 13-story tower was erected at the north end of the stadium that visually complements the Seattle skyline. The tower features a vertically oriented scoreboard which is the first of its kind in the NFL.

Though the field is open, 70% of all the seats on the field are covered, even though it does not have a retractable roof.

10,000 cubic yards of concrete was used to build the stadium, this is equal to a 3’ sidewalk from Seattle to Boise, ID. 100% of the concrete from the Kingdome was processed and recycled with 50% built into CenturyLink Field.

On December 2nd, 2013 the Seattle Seahawks broke the world record with a crowd noise of 137.6 dbA on the field against the New Orleans Saints on Monday Night Football. This is as loud as a Jet engine on the field. So are Seattle fans more enthusiastic than other fans? Not exactly, Paul Allen wanted a stadium to be loud, so he enlisted his design team to build it with that in mind. Sitting on a small footprint, the fans are piled steeply to form a tube of swirling sound. With 70% of the fans sitting under cover, the canopies are shaped like parabolas, pointing sound back into the field. With aluminium stands in the end zone, stomping feet add the enthusiasm, thus creating one of the loudest stadium in the world. Today The loudest crowd roar at a sports stadium is 142.2 dbA and was achieved by fans of the Kansas City Chiefs (USA), at Arrowhead Stadium in Kansas City, Missouri, USA, on 29 September 2014. The roar was recorded with 8 seconds remaining in the first quarter. The Chiefs defeated the New England Patriots 41-14. 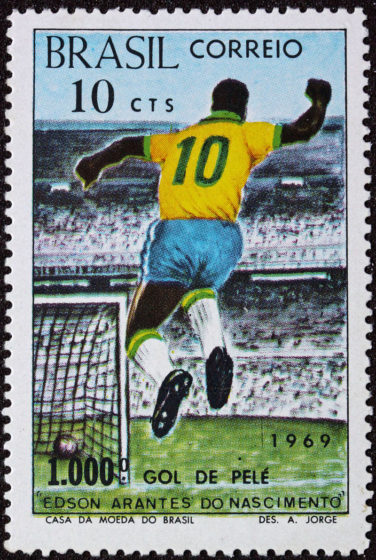 10. The Seattle Sounders are one of the most dominant teams in MLS and have one of the most enthusiastic fanbases in the sport, selling out 127 matches as of 2015, the longest streak in MLS history. But possibly their most historic moment came in 1976 when the Sounders, then of the North American Soccer League, played the first sporting event held in the Kingdome.

Not only was it the first sporting event held in the Kingdome, but the legend himself was there to christen it. Pele was playing on the opposing team, the New York Cosmos, and the crowd of 58,128 turned out to see the legendary player.

Pelé rose to the occasion, scoring the first and last goals in leading the Cosmos to a 3-1 win. That means Pelé also was the first to score in the Kingdome.

In the crowd, that day was a kid named Adrian Hanauer, who grew up to become part-owner and general manager of the current Sounders. The team is also part owned by comedian Drew Carey who lives part-time in Seattle in his floating home on Lake Union.